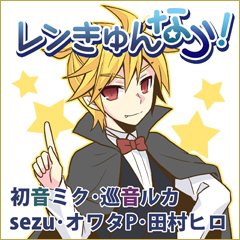 This song was uploaded for the Kagamines' 5th anniversary, and is the answer song/parody of "Rin-chan Nau!". Contrary to their attitude toward Rin, Luka and Miku act indifferent toward Len, often pointing out his flaws and ridiculing him (while still occasionally pointing out how they love Rin). Following the mood of the song, both girls sing with a dull tone, and the music is kind of dissonant in comparison to the original.

This song is featured in the EXIT TUNES compilation album Vocalosensation.