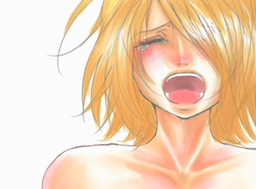 The song was first uploaded on May 3, 2009 and it was one of the first few early works of Live-P. It was one of his most notable hits aside from The Worst Carnival and Don't Mylist Me!!, and also reached over 100,000 views (nico hall of fame). Many PVs / derivatives were made from the song. Renraku Madaa managed to reach 11th place in the Vocaloid Weekly Ranking #84.

On June 17, 2009 KarenT labeled the album "Renraku Madaa" consisting three tracks. The original version, the off vocal, and the gaman version. It's also featured in the Exit Tunes compilation Vocalonation. Also, it became one of the demo tracks used for Rin's Append power sample.

Renraku Madaa tells a story of a girl in a relationship. Apparently her "boyfriend" hasn't contacted her for a while, and she was afraid to check up because she was afraid that he'd say "who are you". Overreacting, she started to think maybe there was something wrong with her; asking whether he hates her because she's not pretty and so forth. Even so, she was willing to change. However thorugthout the song, a ringing sound can be heard in the background, which could imply that he is indeed calling her and she ignores it, doesn't hear it or is to afraid to pick up.