"Lost One's Weeping" is an original song by Neru. It was uploaded to NicoNico Douga on March 4, 2013, and later officially to YouTube on December 19, 2017. It is a song about questioning the burdens of schooling. The boy in the video is named Mamoru.

This song has entered the Hall of Fame on March 6, 2013 after 1 day, 13 hours, and 22 minutes; and the Hall of Legend on May 24, 2013. It also exceeded over 10 million YouTube views and received lots of VOCALOID, UTAU, and Utaite covers. Hence, this is Neru's most notable song, alongside "Law-evading Rock"; and Rin's most notable song.

Feel it cutting into me, that doubting painful knife
Stabbing a vein at the end of it all
Sickly love spurts out
Even my Les Paul became a deadly weapon
It's no-fiction

I like Math and Science
But I was never one for Japanese
I'd worry about which answer was right
Jokes on me, both were wrong

Today's homework is my basic self
With just enough, with no complaints, living in the nowadays
But why do we sometimes—no, always
Say we're sad? Say we're lonely?

Can you read the kanji on the board?
Can you read the shape of her heart?
Who stained that heart black?
Who was it? Who was it!?
Can you do this problem on an abacus?
Can you undo this collar on her neck?
Can we keep going like this?
What're you gonna do? I don't care anymore!

Can't do yesterday's homework, as always
With just enough, with no complaints, living in the nowadays
But why does this lump in our hearts
Say we want to disappear? Say we want to die?

Do you remember the formula for area ratio?
Do you remember the dreams of your childhood?
Who threw those dreams in a ditch?
Who was it!? You know who it was!
When are you going to grow up!?
What is a grown-up anyway?
Who has the answers?
What're you gonna do? I don't care anymore!

This song was featured in the Magical Mirai 2015 concert.

Rin's Astray module for the song "Lost One no Goukoku", designed by 456. From the video game Hatsune Miku -Project DIVA- X. 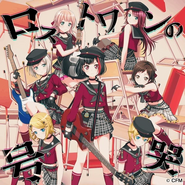 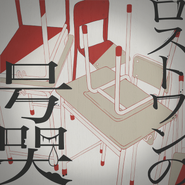