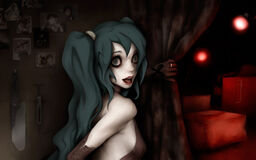 “The enamored girl. She has a bright laughter and her eyes are filled with madness. I've realized something.”

"Rotten Girl, Grotesque Romance" is a song featuring Hatsune Miku by Machigerita-P. It was originally uploaded onto Nico Nico Douga on July 21, 2009. It currently has more than 600,000 views on the site, making it one of Machigerita-P's most popular works. The song tells a story of a stalker (Miku) who is stalking someone who is dating another woman.

It is the prequel to Psychotic Lounge.

Machigerita stated in a livestream he wrote the lyrics for the song while taking a train ride home, commenting that he sometimes thinks back and wonders what was going through his brain when he wrote it.

illustration of the stalker by Machigerita