“By the way, this is doriko. I started from light music. This time, the lyrics were inspired by folklores about good kids. I feel grateful to have so many listeners, thank you!”
—Author's comment

Romeo & Cinderella is an original song by doriko.

The song is about a schoolgirl who is deeply in love with her "Romeo". Her parents disapprove of the relationship, so she lies constantly to keep it in secret. The girl compares her situation with Juliet's forbidden romance, but instead of Juliet's tragic ending she wants to have a happy ending like Cinderella did.

At the end of the song, she realizes her situation is critical and her own lies are menacing her, so she asks her "Romeo" to come and save her. Interestingly, near the end of the song it is hinted that possibly her "relationship" could have just been a fit of passion.

The song has over eight million views, and has entered the Hall of Legend. It was released with its instrumental as a KarenT single, and is the title track of doriko's first major album, ロミオとシンデレラ.

The song was originally name Romeo to Cinderella but then was changed to Romeo and Cinderella when translating the title to English.

doriko has since then released a sequel to the song, Watashi to Juliet (Me and Juliet).

This song features vocal switches for Kagamine Rin and Megurine Luka. However, these are exclusive to the song's Project Mirai appearances.

Don't make my love your tragic Juliet
Take me away...

That's how I feel

Tell Mom and Dad goodnight
Wish them sweet dreams, at least
It's bedtime for grownups

Choking on captivating caramel
Entwining my bare, bashful legs
How far can we venture tonight?

Be gentle, don't bite
I still dislike bitter tastes
Having been spoiled on Mom's homemade sweets

When there's something you don't know
It's only natural to want to find out
Show me everything
And just for you, I'll show you mine too...

I'm a Cinderella, yearning for you,
I'll come running in my school uniform
Oh magic, please stop the hands of time
Before the villain interferes

I'm a Juliet who wants to run away
But don't call me by that name
We have to live happily ever after
Otherwise where's the fun?

Tell me, will you choose life?

Won't you peek into my heart?
See how it brims with desires?
I've got room for more
Pack my heart until it's full
Until it fills up the place
Where you are

But what would be the point?

But Mom and Dad are the same as ever
They just want more
You're right, I should be honest
The axe I dropped was one of gold

Come to my rescue, before it's too late!

Miri Shira Romeo and Cinderella ~Another~ 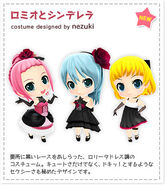 "Romeo to Cinderella"s garage kit figurine in the Wonder Festival 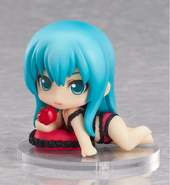 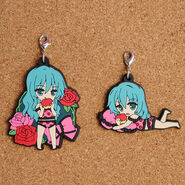 Alternative version of the monster "Goodnight Lullaby - Hatsune Miku", showcased for promotion and in-game use