“Howdy. I’m ryo. Thanks to everybody for listening! Take a break and listen to this great song no matter how you’re dressed! yo ne!”
—Author's comment

"World is Mine" is an original song by ryo. The song is about a spoiled girl who believes herself to be a "princess" that the world revolves around, and details her struggles with falling in love with a stand-offish boy. There are many PV variations for this song; however, the narrator is almost always portrayed as a "himedere" but short-tempered and fickle Miku (which is interesting because of the meek and sweet-tempered manner Miku is often portrayed having). The song is considered by some fans to be Miku's "character theme song".

This song has entered the Hall of Legend. It also received lots of covers by VOCALOIDs, with the lyrics changed so they match up with nearly every character's perspective; UTAUs; and utaites, mostly female singers on Nico Nico and YouTube. Hence, this is ryo's most notable song, one of Miku's most notable songs, and one of the most popular VOCALOID songs of all time.

An unofficial YouTube upload of the song in concert managed to garner around twenty million views before being deleted, making it by far the most-viewed VOCALOID video on the website at the time. It and another "World is Mine" video were removed because of copyright claims to the footage by SEGA.[1] Since then, several other reprints on YouTube have reached well over a million views.

In addition to the Miku version of "World Is Mine", there is an official sequel called "I'll Teach You" ("Oshiete Ageru" in romaji) sung by Nagi (a female singer in Supercell).

I'm the #1 princess in the world
And that's how you'll treat me, got it?

One: You must notice that I changed my hair
Two: Take a good look, all the way to my shoes
You following?
Three: For every one word I say, reply with three
Got it? Then do something about
My idle right hand!

I'm the #1 princess in the world
Notice me! Hey! Heeey!
Keeping me waiting is
Out of the question
Just who do you think I am?
Hmph, I think I could go for some dessert!
This very instant

Shortcake with a strawberry on top
Premium creamy egg pudding
Okay, okay, I'll try to contain myself…
Don't write me off as selfish
Because hey, I can make it on my own
You're gonna regret it later

No doubt! 'Cause you know I'm…

The #1 princess in the world
You'd better keep your eyes on me
Or I might not be here one day
Out of nowhere, you pull me from behind
"What are you… Huh?"
"Look out, you almost got run over!"
You say as you turn away

…Maybe it's you I should be looking out for

This song is featured as one of 2 songs selectable as a miniature holographic performances in
HAKO VISION's Hatsune Miku (pink box version).

Miku gave her first overseas performance on November 21, 2009 at AFA in Singapore, and Miku Miku ni Shite Ageru♪, Koisuru VOC@LOID, and "World is Mine" were featured.

Animelo is an Anime-Central concert where songs from various animes are performed in a concert-like fashion. Miku made an appearance, singing "World is Mine", and Tell Your World.

ANISONG is a world-wide music tour, and Hatsune Miku made an appearance during the Las Vegas branch of the tour. She performed Sharing The World, "World is Mine", and "Tell Your World".

An appearance by Miku (with band MKP39) at the "JOIN ALIVE" music festival. She performed "Tell Your World", Himitsu Keisatsu, Nijigen Dream Fever, Arifureta Sekai Seifuku, glow, Hatsune Miku no Gekishou,
"World is Mine", and ODDS&ENDS.

"World is Mine" has been featured in every Hatsune Miku -Project DIVA- game to date with the exception of extend (though extend is an expansion of -Project DIVA- 2nd, which featured it, and extend can play songs from 2nd), the PS3 version of F (the PSVita version features it, but it can only be played through the AR) and Project mirai, making it the most recurring song in the series (not counting "Ievan Polkka", which is a cover song). It was also the first song playable (but not heard) in the first game, making it the first playable song in the series. Its appearance in the non-Project DIVA game, Taiko no Tatsujin Wii: Kettei-Ban marks the song's first inclusion on a Nintendo console and outside a Sony console, while mirai 2 would be the first in the Project DIVA series on a Nintendo console to include it.

Concept art for the ＳＧコス contest by Takumi Torigoe 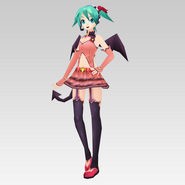 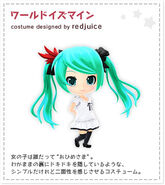 Miku's World is Mine module, featured in Project Mirai 2.

Miku's Supreme module for the song "World is Mine", designed by redjuice. From the video game Hatsune Miku -Project DIVA- F 2nd.

SEGA's loading screen, for the song "World is Mine". From the video game "Hatsune -Project DIVA- F 2nd". 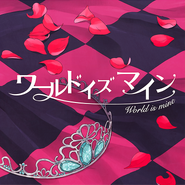 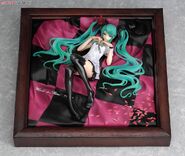 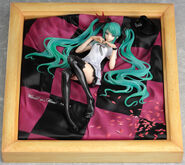 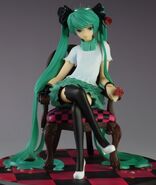 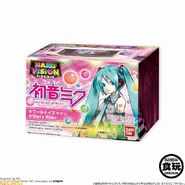