"Villain" is a song by Teniwoha featuring flower, addressing the topic of gender dysphoria.

This song has entered the Hall of Fame on Niconico, eventually moving onto the Hall of Legend on November 18, 2020; and has surpassed 1 million views on YouTube. The song has become Teniwoha's most notable flower composition on both of his main platforms, and surpassed "Kosho Yashiki Satsujin Jiken" as his most notable song overall on his official Youtube account.

Maybe hated when holding hands
Reported when you stop "Rat race"
I'm not a mutant, it's just me
X or Y

Stubborn people have multiple good and evil
They say I am "infringing" you
Oh...

Mr. Crazy Villain Villain
Nocturnal petals
I wear different clothes and pretend to be a boy in front of you
Dear Sirs Dr.Durand-Durand,
Please come to pick me up
For unrelated people I'm a villain

Keeping the deviant sex secret
A dead end with stamens and stamens?
Hey Do you know a writer named Rampo? Import you
Someday, artificial flowers will bear fruit

Do not be afraid A wide variety of genders
Let's talk loving and sad
"So what?"

Mr. Crazy Villain Villain
Be happy with the possibilities
My heart is 1LDK Let me be jealous
Hi there! My motto is YOLO
Need a little love
Nobody knows I don't want anyone to know
Under my skin

A song dedicated to the great villains
Completely playing the villain
A cruel town has a beautiful rainbow
Dancing on obscene ads, it's pop fonts love


Mr. Crazy Villain Villain
Nocturnal petals
I wear different clothes and pretend to be a boy in front of you!
Dear Sirs Dr.Durand-Durand
I am here!
For unrelated people I'm a villain

This song was featured on the single ヴィラン (Villain).

This song was featured on the following compilation albums: 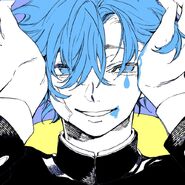 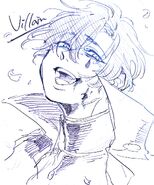