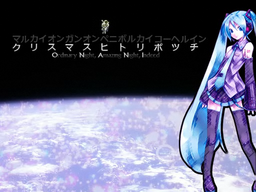 Christmas in Japan is quite different from in Western countries. Only one percent of the Japanese population is Christian, so most Japanese people don't see religious meanings of the event. It is rather recognized as a romantic time for lovers to be more intimate each other with the influence of recent TV commercials, soap dramas and J-pop songs. The title Christmas Alone suggests the boy doesn't have a girlfriend to spend this romantic time with.

The lyrics are constrained, written using a set of characters that represent units; for example, ㍆, ㌋, and ㌉ represent Mark (a former German currency unit), nautical mile and ounce. The lower halves of each character make up the lyrics.