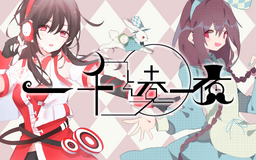 “Finally, it's Ling's 2nd birthday! This time we made a symphony, electronic band, 3/4, 4/4, 2/4, a very colourful song (how wordy). Hope everyone likes it, Happy birthday to Ling!!”
—Author's note (translated by laterallanterns)

"Yīqiān Líng Yīyè" is an original Yuezheng Ling song that was uploaded to celebrate her character birthday on April 12. The song features Ling depicted as various fairy tale characters.

The song was accused of plagiarizing the title of Quadimension's promotional YANHE artbook, "Tales From The Thousand And One Pages" ("一千零一页"), as the style of name and the pronunciation ("Yīqiān Líng Yīyè") are similar. However, this dispute has been resolved.

This song was featured in the Líng album.

This song was featured in the 2019 4.12. Yuezheng Ling Online Birthday Party concert.