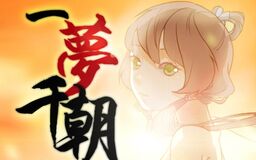 "Yí Mèng Qiān Cháo" is an original featuring Luo Tianyi. It is followed by "Yìyǔ Hóngchén".

According to the lyricist, the song is about a girl named Tianyi (Luo Tianyi) from the Song dynasty who meets a girl named Ling (Yuezheng Ling). Ling was lost when Tianyi was washing clothes by the river, so Tianyi invited the other to live with her. They gradually develop feelings for each other and play. They happily spend half a year together. But one day, Ling disappears, only leaving a note that explains that she was actually from the future. Due to a distortion of the time and space, Ling time-traveled back to the Song dynasty, where she met Tianyi and fell in love with her. But because the distortion of the time and space was restored, she must go back, leaving Tianyi alone. At the end, Tianyi hoped that she meets with Ling again in dreams.

In regards to the words at the end of the PV, "绫 欢迎回家," (Ling, welcome home), the lyricist says that it can mean that Tianyi meets Ling again or that Tianyi is waiting for Ling to come back. The words also represent the expectation of Ling's release.