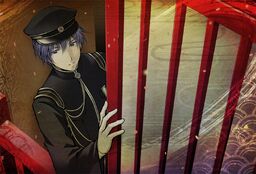 "First Quarter Moon" is told from the man's point of view as he expresses his love for an unspecified character, and claims that he would even "walk through a rainstorm" for them.

In the novel of Senbonzakura, it is confirmed that the protagonist of the song is named Seine Kaito (靑音海斗), the character in which is modeled after the VOCALOID KAITO.

This song first appeared in the musical adaptation of Senbonzakura.

This song has entered the Hall of Legend on August 30th 2018.

Promotional artwork for the song Jougen no Tsuki

Promotional artwork for the song Jougen no Tsuki

Retrieved from "https://vocaloid.fandom.com/wiki/上弦の月_(Jougen_no_Tsuki)?oldid=1093185"
Community content is available under CC-BY-SA unless otherwise noted.