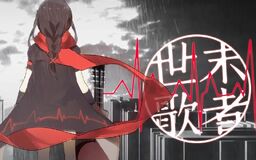 According to COP, the story of the song goes as followed: God (YANHE) wanted the vagabond singer (Ling) to make a bet with her where the singer was not permitted to communicate with others as long as anyone was willing to face their deaths along with hers in a world heading to an end that she created. God would realize her dream and allow the world would last, otherwise the only loop and death would never stop.

The singer, being from a world that was already destroyed and yearned for fame, accepted the bet. But when the loops began, she only faced the indifference toward her time after time, with everything ending in a lonely call at the last moment.

That was, until she noticed a girl (Luo Tianyi) who stopped for her in every world, but for no more than a while. The girl stepped forward again, immersing herself into sadness.

After a hundred of doomsdays, the singer faced the crumbling rubble, feeling crowds, and looked into the distance to the girl staring at the cumulonimbus, but not understanding her numb face which was distinctly different from the others' fear, weeping, and wrath.

The up-and-down loneliness gradually extinguished the singer's yearning for fame and wealth. She had nobody but someone to approach and to ask about her humble wish.

On another doomsday, she looked at the fragile silhouette of the girl in the pouring rain. Not daring to approach, she could only sing that song distantly and desperately, praying for her to turn back and look at her someday, on a more distant day when the girl would stand next to her and respond to her unspoken heartfelt; when they would face their doomed end with their hands holding.

Note: the Japanese lyrics have kanji use, wording and grammatical mistakes.

This song was featured in the Quadimension VI album.