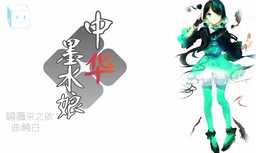 "Zhōnghuá Mòshuǐ Niáng" is an original Luo Tianyi song that tells the story of a travelling swordsman who demands justice with his sword. It is the first song of the "Chinese Girl Project" series and represents the element of water.

The original version and the remix were featured in the Zhōnghuá Shàonǚ Project album.

Retrieved from "https://vocaloid.fandom.com/wiki/中华墨水娘_(Zhōnghuá_Mòshuǐ_Niáng)?oldid=1089426"
Community content is available under CC-BY-SA unless otherwise noted.