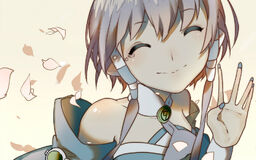 "Wèile Nǐ Chàng Xiàqù" is an original song by COP featuring Luo Tianyi. It was uploaded to commemorate Tianyi's 4th anniversary since her VOCALOID3 voicebank released to the public. In the PV, Tianyi is seen walking through a timeline that showcases different Tianyi derivatives from numerous original songs featuring her. The timeline starts from songs created in 2016 and regresses back to her earliest songs in 2012, followed by her debut as Luo Tianyi and finally her original concept, Yayin Gongyu.

A draft of the song's lyrics

Retrieved from "https://vocaloid.fandom.com/wiki/为了你唱下去_(Wèile_Nǐ_Chàng_Xiàqù)?oldid=1094977"
Community content is available under CC-BY-SA unless otherwise noted.