Vocaloid Wiki
Register
Don't have an account?
Sign In
Advertisement
in: Hall of Legend, Songs with 10M YouTube views, Songs with 1M bilibili views,
and 8 more

"Otome Dissection" is an original song by OTOIRO and emon(Tes.). Correlating with the song's title, "Otome Dissection", its movie focuses on the illustrations of human skeleton. The plant Chinese Lantern makes appearances in various scenes of the songs. In Japanese Hanakotoba, it represents 'deception'[2]. This is similar to what the lyrics depict, which are the struggle in love and deceit.

One fan analysis theorizes that the song is about the struggle of one's insecurity in love, unsure of whether the passion really is love or an illness. However, the song is open to however viewers' may interpret it.

This song marks the debut of OTOIRO and has been well-received. Its YouTube upload exceeds 2 million views over the span of one week, whereas its Niconico upload currently holds the record for the third fastest VOCALOID song to enter the Hall of Legend, at 20 days and 2 hours in total, third only to Pamela and DUNE

This song was featured in the album Android Girl. 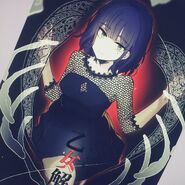