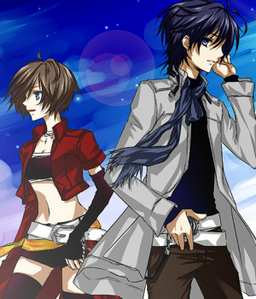 The song was first uploaded on September 16, 2010; as said by sigotositeP's video description of the song, she wanted to make Meiko and Kaito sing something rather powerful. Later the song was featured and remastered in sigotositeP's album SS -Tobira no Mukou sono Saki e. As an extra, this song was given the title "Legendary Senior (Meiko, Kaito) Master" for it's fine tuning.

It tells a story of "two" who crosses paths and had to endure all. Farewells have to be said, the songs talked about memories, and how the two (Kaito and Meiko) had to move on, even they have to go on separate ways. And so, they continued their journey.