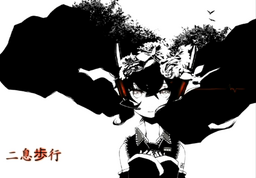 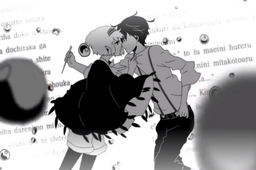 Written by an unknown artist, this version of the lyrics was used in the english version of Hatsune Miku -Project DIVA- F 2nd.

"This is the process of my evolution, page 1"

I want to hold you, so I walk on two feet
It's lonely alone, so I'll breath with you

I'd like to see you
So tell me whose milk are you nursing on these days?
Have you learned to talk yet?

As I go to embrace you, the arms I once crawled on
For some reason begin to hurt you
Words I've learned cut you like a knife
My life cutting things to shreds

A kiss that seeks you out
From now on, my breath will nurse you
Our words rust in saliva

Miku's Breathe With You module for the song "Nisoku Hokou", designed by Siracomgi. From the video game Hatsune Miku -Project DIVA- F 2nd. 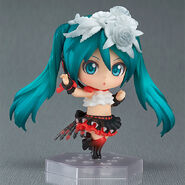 Retrieved from "https://vocaloid.fandom.com/wiki/二息歩行_(Nisoku_Hokou)?oldid=992607"
Community content is available under CC-BY-SA unless otherwise noted.