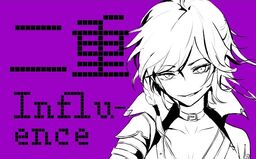 "Èrchóng Influence" is an original duet song featuring Luo Tianyi and YANHE. It is the second song of the Paranoia Series.

The song is about Ling Yu (YANHE derivative), an imaginary girl who attempts to kill Ling Luo (Luo Tianyi).