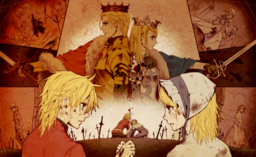 “The future I dreamed of with you...”
—Author's comment (translated)

The story is seemingly about a prince and princess of two war torn countries. As children, they meet eachother while the countries are at their worst without knowing the truth of the other one's status. They become friends and make a promise together. As they grow up, the now king and queen have seemingly forgotten their childhood and are now fighting in the frontlines of the war. Soon they end up crossing blades and recall their childhood, and start to question why they must fight. Whilst crying they promise to continue the duel until their childhood promise is fullfilled.

The song is featured in the albums EVER DREAM and Mistletoe ~Kamigami no Yadorigi~, and has reached the Hall of Fame.

Note: Rin and Len are singing more or less different lyrics at the same time here. Just because one of their lines are before the other doesn't mean that they sing first or last.