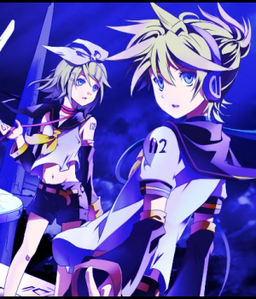 "Ningen Shikkaku" was first uploaded on December 26, 2009 and is tagged as one of the Kagamines' birthday anniversary (鏡音誕生祭2009). It was Neru's third original Vocaloid work, and his first original song to feature Kagamine Rin (his first songs only feature Len).

A year after the song's upload, Neru uploaded another version of the song on November 24, 2010 with a better mixing and slightly different illustration. It was uploaded in celebration of Twins Day on November 25. The remix version was more well received, with double the amount of views the original has (160,000 views). Note that Neru did not give a name to the new version.

Neru mentioned, although the song was rather dark, the song does not have a definite meaning. The title of the song, "Ningen Shikkaku" (No Longer Human) was based on the novel written by the writer "Osamu Dazai", with the title of the same name published on 1948. The novel tells a story of a the protagonist preparing himself towards a self destruction; it was said that the novel is written in a "brutally honest manner", and is one of the classic Japanese literature. The song reference several points in the novel; despite Neru saying it has "no meaning".

This song has entered the Hall of Fame, along with its remake version.