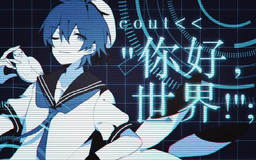 "Hello World" is an original song by SineP and Mingqi de Zidie featuring Zhiyu Moke. The title of the song references the "Hello, World!" program.

SineP states that the song is an image song of Moke's character. The song depicts Moke's double life as he uses his computer extensively day and night as a programmer, gamer, and an otaku while also being a performing keyboardist. It also shows Moke's view of the world and self, in which no rule is not to be challenged and the judgments of others mean nothing to him. Sang in Moke's perspective, the song states repeatedly in the chorus: "enjoying the gamut of human emotions in the virtual world, why not live life as the game it is?".

This song was featured in the 2020 Vsinger Live concert.

Retrieved from "https://vocaloid.fandom.com/wiki/你好，世界！_(Nǐhǎo,_Shìjiè!)?oldid=1147294"
Community content is available under CC-BY-SA unless otherwise noted.