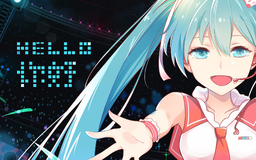 "Hello" is an original demo song by MusikM and Da Ming featuring Hatsune Miku V4 Chinese. The song is about a girl (Miku) learning Mandarin Chinese from a friend that she had met while in China. Overall, it's about friendship and Miku finding herself in a new country.

This can be evident by "别扭的发音和语法 我想我得练习对话" ("Twisty pronunciations and grammars. Thinking I need to practice conversations."), "手把手教我的书法 握起毛笔一撇一捺" ("Holding my hands to teach me calligraphy. Holding the brush with writing and stroke."), and "我拿出拼音表 小声回答" ("Grabbing out my Pinyin table, I answer quietly.")

This song was featured in the MIKU WITH YOU 2017 SHANGHAI concert.

Retrieved from "https://vocaloid.fandom.com/wiki/你好_(Nǐhǎo)?oldid=1096865"
Community content is available under CC-BY-SA unless otherwise noted.