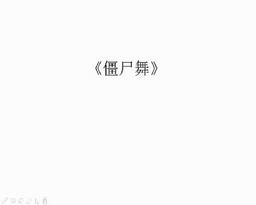 “Let's go and dance together.”
—ilem

"Jiāngshī Wǔ" is an original song by ilem featuring Luo Tianyi and YANHE. It is the second song of the Didn't Eat Medicine Yet series.

In this song, Tianyi joins in with the dance taking place in the plaza after eating her dinner. As she joins in, she suddenly feels scared and tired and wants to go home, but her body refuses to listen and just keeps on dancing. Then, she realizes that people who were dancing were all zombies and YANHE starts to sing, saying that "you will never become old" and to "give up your heart and mind" once you join into the dance.

As Tianyi starts to become a zombie and losing control over her body, YANHE's voice starts to become bitter, and says that whoever stole her medicine and let her suffer torment will forever become a zombie. At this point, Tianyi admits her wrongdoing (presumably stealing YANHE's medicine from the previous song, "Jīntiān Méi Chī Yào") and begs for her to let her go, pleading that she doesn't want to become a zombie. But YANHE is relentless and says that "since you already came, don't even think about escaping" and "why not just continue the dance?".

In the end, Tianyi becomes a zombie just like the other dancers, and joins YANHE in her horrific song.

It achieved 1 million views on bilibili in June 2016.

Retrieved from "https://vocaloid.fandom.com/wiki/僵尸舞_(Jiāngshī_Wǔ)?oldid=1103692"
Community content is available under CC-BY-SA unless otherwise noted.