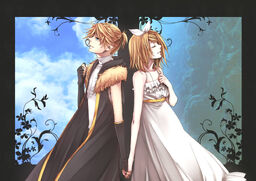 "Synchronicity ~第二章 光と影の楽園~" is the second chapter of the Synchronicity series. Len infiltrates the castle of Luka, a pythoness of the empire, to find Rin. There Meiko, who was nobly born and became a fencer of the empire, attacks Len. However, during her fight with him, he reminded her of her old friend Teto, who sacrificed herself for Meiko by becoming a Diva. Thus, Meiko joins him on his journey to save his sister. Len, Meiko, Gackpo and Kaito join together to travel to the dragon's lair and confront Miku, the Dragon's guardian, who was blinded and forced to wear a magical mask by the clergy. However, Len defeats her by destroying this mask. In the end, Len jumps off a ledge towards the distant figure of Rin, hand reaching for her, with tears of joy in his eyes.