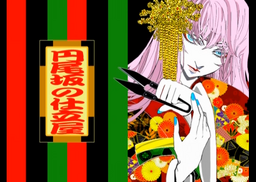 円尾坂の仕立屋 (The Tailor of Enbizaka) is mothy's sixteenth original VOCALOID work, and his first using Luka. This song is part of the Seven Deadly Sins series as Envy, as well as mothy's larger world, The Evillious Chronicles.

The song concerns Kayo Sudou (Luka) a tailor in the town of Enbizaka, who is known for her skill. The only thing she thinks about is the fact that her "husband" (KAITO) is unfaithful and does not come "home". She sees him walking with a woman in a red kimono (MEIKO), later murdering her with her tailor scissors and takes the kimono. She acts as if nothing happened and is concerned about the rising murder rate. She later sees him with a girl in a green sash (Miku) and does the same to her, taking the sash, again acting as if is in the unknown. Kayo later sees him with a girl who he buys a yellow hairpin (Rin), and becomes disgusted when she sees that she's a little child but it doesn't stop her from murdering the girl. The tailor dresses in the personal items of the murdered women, in an attempt to become the ideal woman for her lover. As it turns out, however, her "husband" does not even know her; the three females were his wife (red kimono) and daughters (green sash, yellow hairpin). Offended at this apparent lack of acknowledgment, Kayo murders him, too, and carries on with her work. Its initial phrase is 「さあ、仕立てを始めましょう」(Now, let's begin tailoring).

Retrieved from "https://vocaloid.fandom.com/wiki/円尾坂の仕立屋_(Enbizaka_no_Shitateya)?oldid=1200323"
Community content is available under CC-BY-SA unless otherwise noted.