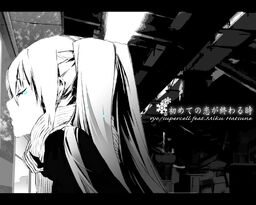 "Hajimete no Koi ga Owaru Toki" is a song about parting with one's first love in the winter, and wondering what the future holds. It has entered the Hall of Legend and has been featured on several concerts.

The cold winter wind brushed my cheeks
I breathed into my hands and rubbed them together
The city is all lit up, it's like magic
The bare trees sparkle

I wanted to tell you, but I couldn't
This feeling inside, I pushed it away
It was a decision I'd already made
And I'm okay with it
I won't look back, so...

I want a connection
I wished for it with all my heart
My hands are empty
So, this is what goodbye is?

Thank you, goodbye
The words won't come
Just for now, give me courage
"Um, hey--"
The words on my lips, the distance between us is 0
...it's okay to cry now, right?
I don't need words anymore
Please, just hug me tight

Retrieved from "https://vocaloid.fandom.com/wiki/初めての恋が終わる時_(Hajimete_no_Koi_ga_Owaru_Toki)?oldid=1102212"
Community content is available under CC-BY-SA unless otherwise noted.