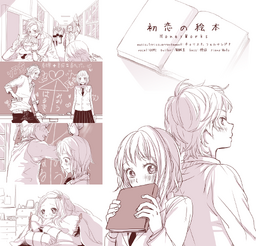 “"There is any regret in the first love? "”
—Author's comment

This song is part of Honeyworks' Confession Executive Committee Love Series and it focuses on Haruki and Miou's relationship, from Miou's point of view.

Aida Miou starts off the song a few years in the future by wondering, "When was it when we first met? Do you remember, those few springs ago?" She remembers seeing Serizawa Haruki in the hallways, playing around with another boy. Even though the two were in different classes and weren't around each other during school much, there was something about Haruki that Miou says she just couldn't ignore.

The she asks, "When was it we first talked? Do you remember, how you were the one who spoke to me first?" The two start talking, and before long, rumours about them dating start appearing. They get teased about it, but the teasing brought them slightly closer to each other, making his blunt personality even more apparent to her.

She keeps reprimanding herself for never being able to confess her feelings to him. She keeps thinking things like, "If I'd only worked up the courage, he would have loved me too, right?" However, no matter how positive about it she had tried to be, she had been too shy to tell him.

She admits to herself that even if she never confessed, he was definitely her first love. Even if their time together was a short period in their lives- even if she's a lot older and no longer her old self that was in love with Haruki, she was glad to have met him and been able to love him. Even so, she wishes she had worked up the courage to 'cross those four inches' and lock hands with him to confess. Still, she didn't and must leave behind this small sliver of her past- her first true love.

It has entered the Hall of Legend, reaching over a million views on NND and a million on YT.

A novel based on the song, called "First Love Picture Book", has also been written.

Cover for "First Love Picture Book", by Yamako.
Add a photo to this gallery