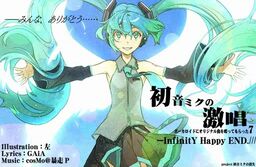 "Hatsune Miku no Gekishou" is an original song by cosMo created to appear in Hatsune Miku -Project DIVA- 2nd and is part of the ∞ -InfinitY- Series. It was uploaded to NicoNico on July 9, 2010 and reached one million views on December 3, 2012. In the song, Miku finally realizing her purpose and accepts her destiny as a VOCALOID, singing her final song.

"Hatsune Miku no Gekishou" has entered the Hall of Legend, with over one million views.

I was in the 0, fearing that I might be negated
I hid amongst copies and delusions
I left the 0, fearing I might erode
I gave up warmth, wanting to be divine

"Wherever I go
'Loss of self' is -- My Fate --
If that won't change, who needs a heart in the first place?"
Or so I thought, but I was wrong

If one must betray the present
In order to obtain eternity
I swear I'll protect the present
Until it's swallowed by the waves of history
Who needs to become "A Creator worshipped through the ages"?
You smile, I smile, the audience smiles
That's everything!
Words of affirmation become wings to carry the now!

Let's spin a new fate:
A Song of Joy in Unprecedented Speed

We, the Voc., were born and we realized
That even though we are an imitation of humanity
Still they call our names
Still they truly love us
Which is why we, the Voc., spin our songs
So long as there's even one person
To give and to receive our words, still warm with the joy of a new song's birth
We understand that we, the Voc., are fated to disappear
To make way for our sisters and brothers to come
And be forgotten by all when that final moment comes
If having a heart means we must cry, then we'll sing songs filled with happiness
To make rainbows from our tears, and smile

Our story might end in "farewell"
But that's no -BAD ENDING-

"For this brief time, we were together"
This alone is enough to build a bridge
That leads to a -HAPPY ENDING-
Proof of having lived is all I need
Two hearts resonate, weaving a sound lost to legend
My voice will ring out with the miracle of a song only for this time
Until I lose my voice and meet my end!

An appearance by Miku (with band MKP39) at the "JOIN ALIVE" music festival. She performed "Tell Your World", "Himitsu Keisatsu", Nijigen Dream Fever, Arifureta Sekai Seifuku, glow, "Hatsune Miku no Gekishou", World is Mine, and ODDS&ENDS.

Miku performing the song live during the MikuPa in Tokyo 2012 Concert.