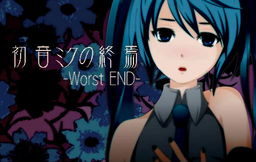 This song is part of the ∞ -InfinitY- Series. In the song Master takes Miku into the Forest of Junk to abandon her.

Retrieved from "https://vocaloid.fandom.com/wiki/初音ミクの終焉_-Worst_END-_(Hatsune_Miku_no_Shuuen_-Worst_END-)?oldid=1130608"
Community content is available under CC-BY-SA unless otherwise noted.