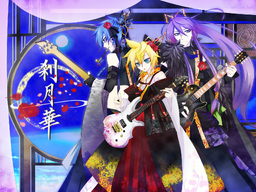 "Fleeting Moon Flower" is an original song by SCL Project and is one of their most notable songs. It is based off the poems from "The Tales of Ise".

This song seemignly focuses on a love triangle with 2 men fighting over a woman. She eventually resolves to commit suicide to end their feud.

This song was later rearranged and uploaded as "Fleeting Moon Flower (2018 LiveVer.)". This version is the first VanaN'Ice song that is a full live version.

IMPORTANT NOTE: The spoken parts are not featured here, as they are not written down by the author.

The original version has entered the Hall of Fame and is featured in the albums Supernova, VanaN'Ice, and LAST COLOR.