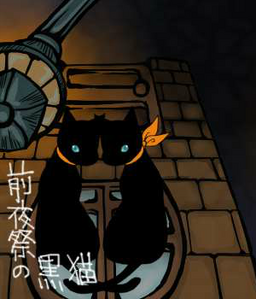 The song was first uploaded on October 27, 2009 and is among some of Mayuko's notable works, the others being Hakaokuri no Uta and Nana Banme no Boku. This is a Halloween song which overall talks of cats.

"Cats on Halloween" starts of as two seemingly innocent cats with blue eyes who only appears in Halloween. Like many other "kids" on Halloween, the cats love trick and treats as well. However in the end it's shown that they're not as it seems. They began to set everything on fire; thus explaining Mayuko's mylist comment to the song Cats on Halloween "beware of fire".

"Black Cats of Halloween", another version (might be a fan made: need confirmation), starts with Rin and Len dressed in black what seemed to be cat costumes. Their eyes as blue as the sky (even though it was colored green in the PV) trick or treating, warning you that if you don't give them any treat, you'll regret it. It is hinted that they used to be normal children until a púca, or a pwca, a black goblin-like fairy, killed their parents. It is unclear how the creature persuaded them to work for him. One of the interpretation is that the Púca made a promise to give them "the flaring stone" that would guide them to their parents so they can be with them again. In exchange they will become will-o-the-wisp , leading travelers astray with a lantern at the night of halloween but would wander the earth in the form of black cats.