Note: The mistranslation "Inferiority Superiority" comes from the title being literally translated.[1]

"BRING IT ON" is an original song by Giga-P. It was made for Len and Rin's 10th anniversary, is their theme song for the Magical Mirai 2018 concert, and is one of their most notable duet songs.

This song quickly gained popularity, entering the Hall of Fame on July 14, 2018. It entered the Hall of Legend on August 30, 2018. It also exceeded over 20 million YouTube views. Hence, this is Giga-P's most notable song, alongsied "Hibikase", and one of the Kagamines' most notable duet songs. 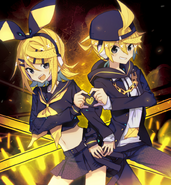 An illustration by △○□× in celebration for hitting 1 Million views on Youtube.