Vocaloid Wiki
Register
Don't have an account?
Sign In
Advertisement
in: Hall of Legend, Original songs, Japanese songs,
and 3 more

This song is YM's 17th VOCALOID work to be uploaded. Many have labeled this as an addicting song; various utaites have taken it as a challenge to change their voices to "different" personalities. It was YM's first song to reach a million views on October 7, 2011.

On GUMI's second birthday anniversary, KarenT featured and labeled the song "Juu-Mensou" making it available for purchase in the iTunes Store, along with several other tracks.

The song tells a story of a girl who, after falling in love, sealed her feelings away and began to change her character to shield herself, developing ten different personalities as such. Eventually they fall all in love with one boy, though unfortunately the boy can only love one of the girls. The ten girls didn't even know each of the other personalities existed, and try to find a solution. In the end, the girl makes a truce with herself, getting rid of her 9 other personalities and is left with her original self.

On August 1, 2013, a light novel adaptation was published by Ichijinsha. It was written by Takamura Kōji (鷹村コージ), illustrated by Uruu Gekka (閏月戈) and also had the participation of YM, who did the concept arts.[1]

Also a the concept arts, illustration and 'making of' of the song where included in the artbook HANNYAG_VISUALWORKS_ICON (はんにゃG映像設定画集「イコン) during the 23th edition of the VOM@S. The artbook also included other Hannya-G's works like Hannya Shingyou Pop.[2] 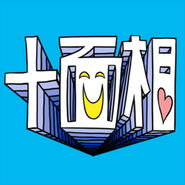 Concept Art from the light novel by YM