The song is yanagiP's most notable work. Not only is this KAITO's first song to have reached one million views, it's also the first KAITO original song to have hit the first rank on the Weekly VOCALOID Ranking. This folk song has many remixes; an album with the title A Thousand-Year Solo was released featuring three remixes by three different producers (sasakure.UK, k-shi, and baker). KAITO Append's version was used as a demo and can be heard in the album VOCALOID Minzoku Chou Kyokushuu.

An interpretation of the song tells of an "artificial" being (KAITO) who is singing a song to someone (possibly a love interest) who has passed away. Even though thousands of years have passed since that person died, and "he" knows that he can never see "that person" ever again, KAITO keeps on singing for that person (thus explaining the title of the song, a thousand year solo).

Alone on a grey hill, treading on dry grass
In the distant sky that sets my mind to wander

Flower petals in the breeze, and your gentle smile
Faint fragments of memory, faded into sepia tones

My body may be artificial
But my heart, I'll give to this song

After thousands of nights,
Even the hill of violets where we met
Has become a monochrome wasteland

My body may be artificial
But my heart, I'll give to this song
Beneath this moon
Though we shall never meet again
I'll keep singing to the sky

A novel based on this song was released on July 25, 2016 from PHP Institute, Inc. 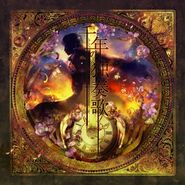