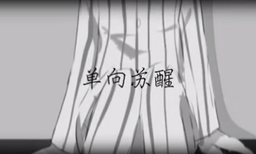 "Dānxiàng Sūxǐng" is an original song featuring YANHE and Luo Tianyi. It is the eigth song of the Bidirectional Series and is a followup to "Shuāngxiàng Jiānjìn"'s events. It is also YANHE's character song in the series.

YANHE is in an asylum. He regrets that he did not tell Tianyi his true feelings for her and wants to try to reverse the ending by confessing his love to her. However, Tianyi kills him anyways so that "they" (referring to her split personalities) would not lose him again. In the end, there is a moment when Yuezheng Ling says "I think I knew them before...".

It is implied in the lyrics that YANHE is the one who keeps resetting the story.

This song was featured in the Shuāngxiàng·Lúnhuí yǔ Xìngfú album.