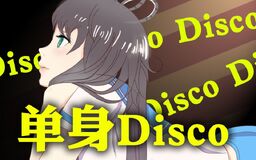 "Single Disco" is an original song featuring Luo Tianyi and T2o, with YANHE, Xin Hua, and Yuezheng Ling singing the harmonies. This is the first song of T2o's 80s Disco Project.

It is about a high schooler viewing her life without having a date in the beginning. This is evident in the line: "情侣们出双入对, 但只有我的身边没有别人陪 " (The couples pair themselves together, but it's me alone without someone to be with). However, nothing in her life can be better than her "disco". The repetition of "Disco" could mean "having fun" or "partying". This is evident in the following lines: "谈恋爱不如Disco" (Having Disco is better than having love.), "喝热水不如Disco" (Drinking hot water is no better than Disco), and "都不如Disco" (Nothing is better than Disco).