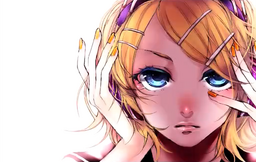 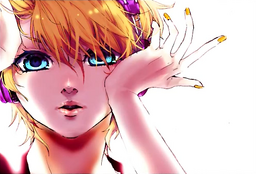 "Butterfly on Your Right Shoulder" is an original song by Nori-P and is his most popular work. It talks about a relationship that is in some way torturous, to the extent that it is as regretful as it is pleasant for the singer. The lyrics are clear, but are left vague enough to be interpreted in numerous ways. One interpretation is that the song is about someone who went out, hooked up, and was left feeling empty afterwards. Another interpretation is that the song is about Rin's love for Len and vice versa.

Originally sung by Rin, Len's version was released a month later and was also well received upon its release, becoming arguably more popular than Rin's version.

Though the song may have the same lyrics in both versions, the way the song starts, goes and ends are different. Rin's version has her singing clearly at the beginning, and ends with her chanting. In Len's version, Rin sings in the background, Len then screams and the song starts; he adds an additional line; and he sings at a different pace throughout the course of the song, ending without Rin's chanting.

Both versions have entered the Hall of Legend.

Sheet music for this song was published in Vocaloid Super Selection.

This version is featured on the albums:

This version is featured on the compilation albums:

This version is featured on the albums:

This version is featured on the compilation albums:

Len's version of this song was featured in the following concerts:

The new cover art for Migikata no Chou from the game Miku Flick/02.

Retrieved from "https://vocaloid.fandom.com/wiki/右肩の蝶_(Migikata_no_Chou)?oldid=1129527"
Community content is available under CC-BY-SA unless otherwise noted.