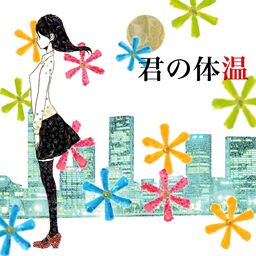 Kuwagata-P's second hit, after "Puzzle", and his first to enter the Hall of Legend. It laments the ending of a relationship, where the singer reflects on their memories together and the "warmth of holding hands." It was featured in the albums EX:P ～Ex:Producers～ and Flashback Sound (フラッシュバックサウンド).

Promotional illustration by Ryouno. [1]
An illustration made by Ryouno to commemorate the song reaching 100,000 views on Nico Nico Douga. [2]
Miku's costume for the song, designed by Ryouno, featured in the game Project mirai.