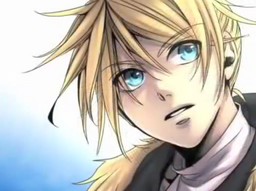 "Kimi o Sagasu Sora" is a song featuring Kagamine Len by Hitoshizuku-P. The first song in the "Synchronicity" series. It tells of how Len was separated from his twin sister Rin at birth. When he grows older, his mother reveals him the truth and he decides to save her from her fate of singing for a dragon until she becomes devoured.

It has entered the Hall of Fame.