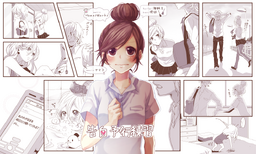 HoneyWorks' 10th published work. It is part of their Confession Executive Committee Love Series. The song talks about Enomoto Natsuki dealing with her feelings for her friend, Setoguchi Yuu.

The song starts with a sudden confession from Natsuki, but due her own embarrassment she quickly dismisses it, saying it was just a rehearsal for her true confession. Believing her lie, Yuu accepts to help his friend and let her rehearse her confession on him. Natsuki struggles to deal with her own feelings as she prepares herself to confess for real and fix her previous mistake. As he said, "I'm cheering for you!" she bursts into her true confession, apologizing for lying to him. Yuu happily smiles and confesses that he likes her as well. The song ends with both returning home as Natsuki wonders if he's capable of hearing her heartbeat.

This song has entered the Hall of Legend on NND and reached over 2 million views on YT.

A novel based on the song, called "Confession Rehearsal", was published by Kadokawa Beans Bunko in 2014. The illustrations are still by Yamako, but the story was written by Touko Fujitani. It would later go on to be the first installment of the Kokuhaku Yokou Renshuu light novel series.

A feature length movie based off the events of the light novel was released in Spring 2016.

This song was featured on the following albums:

Cover for "Confession Rehearsal", by Yamako.
Add a photo to this gallery