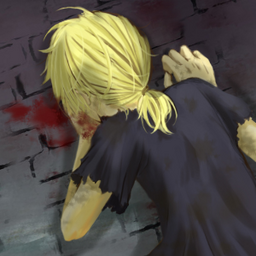 The song was first uploaded on August 11, 2008; a song entitled "Prisoner" with Kagamine Rin as the main vocal. It did not receive much attention, however, three months after the "original" version was uploaded to Niconico, Len's version, along with a collab PV from Piapro featuring Nazekorewo-P, Madoromi, Carl, and more, was uploaded.

It became a hit with over 400,000 views, unlike Rin's version which failed to even reach 50,000 views, and instead sing it's "reply" song to Prisoner entitled "Paperplane". Shuujin-P put the tags "original song" in both the versions; so Len's version is not considered as a cover (same case scenario as Nori-P's Migikata no Cho).

Prisoner tells the tale of a boy in prison. One day he saw a girl who passes by the prison from time to time and decided to send a paperplane to her. Before long, they became friends and he fell in love with her. Unfortunately the girl had to "move away", leaving him in despair. The boy was later executed in a poison chamber, wondering what the girl's name was.

It was revealed on February 11, 2013, that singer Suzuki Konomi's third single "Yume no Tsuzuki" from the anime Sakura-sou no Pet na Kanojo is a coupling song to Shuujin-P's song Shuujin.[1]

On February 27, the same day Shuujin to Kami Hikouki ~Shounen Paradox~' manga is to be released, Konomi Suzuki will release the single "Yume no Tsuzuki" and "Shuujin Paradox 2013", a cover of the song Shuujin with a new arrangement by Shuujin-P.

Retrieved from "https://vocaloid.fandom.com/wiki/%E5%9B%9A%E4%BA%BA_(Shuujin)?oldid=1006601"
Community content is available under CC-BY-SA unless otherwise noted.