“One day, if I lose this beautiful voice, even so, will you still love me?”
—Author's comment

"Wings of the four seasons" is an original song by teamOS.

A crane (Rin) was rescued by a man (Len) when hunting. Grateful, the crane visited him in her human form and the two fell in love and married. But one day the man fell sick, and because they were unable to afford medicine, the crane began to weave cloth with her own feathers and sell the cloth for money.

Following the concept of its album If the World, the song is based on the Japanese folktale The Grateful Crane. It has reached the Hall of Fame, and it has surpassed 100,000 views on YouTube, as well. 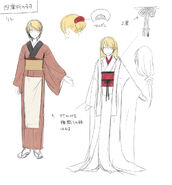 Concept art for the crane wife 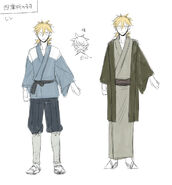 Concept art for the huntsman husband

Illustration of the husband with the crane by Suzunosuke 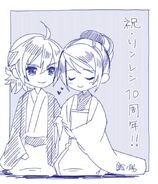 Illustration of the couple by Suzunosuke