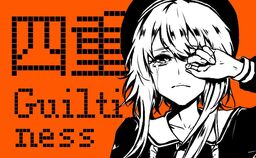 "Sìchóng Zuìniè" is an original song featuring Luo Tianyi, YANHE, and Yuezheng Ling. It is the fourth song of the Paranoia Series.

Ling Luo (Luo Tianyi) suddenly recalls her paranoia in her dreams, namely being hunted down by Ling Yu (YANHE derivative), but argues with herself that she is safe with her newfound love (YANHE). However, she suddenly realizes that she shouldn't trust him and that it is all a lie. She calls herself a monster and the worst girl because she believes that she is behind the appearance of her male lover and Ling Yu. The young man suddenly remembers a moment from Ling Luo's life but says that if the world must burn then he will stay in front of her. Meanwhile, Ling Luo holds a knife at her throat reasoning that if she dies then the horrible things in the world will go away.

However, at that moment, a voice (Yuezheng Ling) in her head tells her goodbye and she loses her courage. She realizes that she can never escape Ling Yu and that they are going through a never ending chase through different moments of her life.

This song exceeded 100,000 views on bilibili. In April 2017, it reached 1 million views and became the first song of the Paranoia Series to achieve this number.