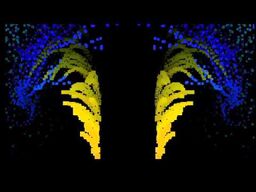 Kikuo's 10th work, a song with a psychedelic video and vague, dark lyrics involving burning representations of the listener into dust.