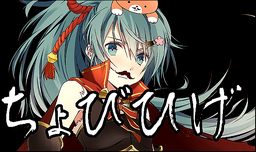 The story is set in early 17th century Japan. It's a tale about two twins, narrated by the younger of them. The narration is broken into 4 parts.

Both of the twins grew up in a castle as members of a noble family. They often switched places with each other and since they were so alike, no one could ever catch them on their pranks. The younger of twins excelled in physical activities, so when it was time for swordsmanship or archery lessons, the twin went instead of the sister. The sister on the other hand, enjoyed various forms of art more, so for tea ceremony or flower arrangement classes, she took the younger twin's place. Together they were like one person.
This part is a talkloid.

The narration fast forwards several years to show the land where the twins live indulged in war caused by a revolution against the shogunate. A plan is formed to infiltrate the enemy's ranks by marrying one of the twins into the opposing family. Out of the two of them, the younger one is selected to go. The older sister however decides to switch places with her twin, saying that her sibling is more needed at the castle right now. Knowing there is no use trying to change her mind about this, the younger twin asks her sister to at least take their kitten with her and to always keep him close.

The castle is under siege and has almost fallen. The younger twin knows those are the final moments but feels happy knowing that the older sister is safe and that together they were able to fool fate, the god and everyone around them. As the twin prepares for death, however...

The song takes an unexpected twist from its heavy and serious tone. Right before the younger twin dies, the older sister appears and rescues her sibling. It's revealed that the little kitten was in fact a vessel containing the spirit of Nobunaga Oda and by putting him on her head, the spirit could posses the sister giving her superhuman strength which allowed her to single handedly end the revolution. The twins reunite and the final phrase from the song is "I love cats".

wogura's promotional artwork for the song