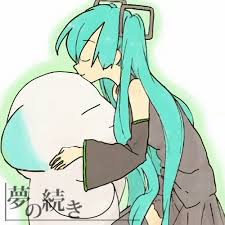 “I devote this song to the composers from the early days of Vocaloid who have made great contribution to the Vocaloid trend today.”
—Author's comment

"Continuing Dream" is an original song by Dixie Flatline. It is a song that is strongly influenced by gospel music, sung from Miku, Len, Rin, and Luka's point of view.

SEGA's loading screen, for the song "Yume no Tsuzuki". From the video game "-Project DIVA- f".