"天樂 (Tengaku)" is a song featuring Kagamine Rin by Yuuyu-P and is their second original Rin work. It's also one of his most notable songs with over 1,000,000 views to date; other notables include "Shinkai Shoujo" or "Clover Club" both sung by Hatsune Miku.

On Yuuyu-P's previous Rin original work; "Gokurakuchou -bird of paradise-", the song have similar points to Tengaku and it may or may not connected to each other (for it's produced by the same group; with Yuuyu-P as the composer, and tamajam as illustrator). 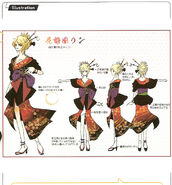