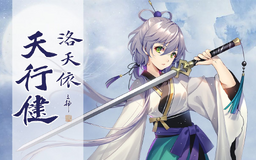 The song was upload by the official bilibili account of the Communist Youth League of China on the day of Zedong Mao's 123th birthday, which together with The State-owned Assets Supervision and Administration Commission of the State Council and State Administration for Science, Technology and Industry for National Defence and other national departments of China, held the "Made in China Day." The title is taken from a line of the I Ching: "As Heaven's movement is ever vigorous, so must a gentleman ceaselessly strive along".

The song describes the strength and resilience of the Chinese, the beauty of China's land, and made many references to ancient Chinese myths and historical events (i.g. Great Flood of Gun-Yu, the legend of Nüwa mending the Heavens, Shennong tasting a hundred herbs, Suiren discovering wood-drilling for fire, etc.) while condemning events from Western myths such as Noah's Ark and the story of how Prometheus stole fire for mankind. It also quoted from many modern Chinese literary works, patriotic songs, and works of propaganda during the Chinese Communist Revolution, including those of Zedong Mao, and from the March of the Volunteers, the Chinese national anthem, while referencing the flag of the People's Republic of China. At the end, the song encourages the Chinese youth to succeed their ancestors and thrive along with the country.