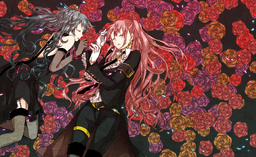 PolyphonicBranch's ninth published work and one of his most popular songs. It was uploaded onto Niconico Douga on February 11, 2010 and since then it has reached over 300,000 views, entering the Hall of Fame.

In this song, Miku and Luka are in love with each other, but their fate is marked by death and their relationship has a love/hate basis. As the Sun and Moon, they are opposites, but they still can't help but feel attracted towards each other. The song heavily implies that they deeply love each other and that their feelings of love outgrow the feelings of hatred, to the point in which Miku claims she could die for Luka's sake and even if they are reborn they will meet each other again.

This song is featured in PolyphonicBranch's albums Heaven, with an extra Rin and Len version, and Dennou Ryodan -Cyber Brigade- (電脳旅団 -サイバーブリゲイド).

Retrieved from "https://vocaloid.fandom.com/wiki/太陽と月のロンド_(Taiyou_to_Tsuki_no_Rondo)?oldid=1163880"
Community content is available under CC-BY-SA unless otherwise noted.