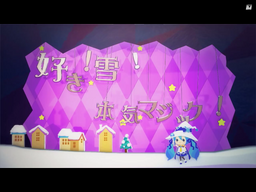 “It's Mitchie M here. Finally it begins at 5th, the beginning of the theme song for "SNOW MIKU 2014". This time I used some part from the English library to do Miku's English rap, and I'm very happy if you are enjoying it.”
—Author's comment

This song has entered the Hall of Fame. It is featured in the album KARENT presents 銀雪のアリア feat. 初音ミク and 39D.

Retrieved from "https://vocaloid.fandom.com/wiki/好き！雪！本気マジック_(Suki!_Yuki!_Maji_Magic)?oldid=1093393"
Community content is available under CC-BY-SA unless otherwise noted.